Using Harbour+HMG or HMG Extended is great but I still needed to provide a solution to quite a number of my existing users who prefer to use our apps in text mode but yet Win32 ready.These users just love to use the keyboard and loathe to use the mouse :-)

I did consider using WVW but since Budyanto does not have time to update his great GUI library, I decided to take a serious look at Harbour + WVG.

After playing with the xMate that came with Pritpal Bedi's Ready to use Harbour Distro, I finally managed to compile and build a Harbour+WVG version of FAS4DOS codenamed FAS4WVG. This is what I have done :-

2. I then copied the previously converted FAS4DOS codes (from 5.2e to xHarbour) into a new folder FAS4WVG under the dev_projects folder. I did this in order to save time as all UNRESOLVED EXTERNALS had already been dealt with as per my previous articles "Migrating from CA-Clipper 5.2e to xHarbour Part I, II & III "

Please note that there is also a default demowvg folder already there for your reference.

3. Moving to the xMate Directory, I launched xMate and created a new Project

4. What is important here is to choose
a) Project Type, default Executable
b) Environment (wvgMINGW, wvgBCC, wvgMSC, wvgWATCOM)
Nb. Only MINGW comes with this Pritpal's Distro
c) You may also choose to Import based on a Clipper Blinker/Exospace link script 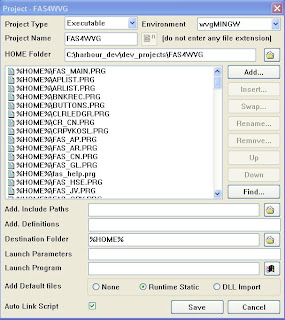 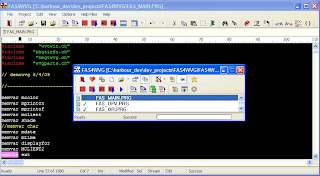 7. I then clicked (b) and starting getting errors mainly due to ambiguous references relating to getlists which I resolved by adding LOCAL getlist:={}

8. Then, I got the 'FATAL : Unknown Error - Check Output Console'

9. I then clicked the icon that had a ? over it and saw that I had a few errors such as
a) Unresolved external references
b) Duplicate decalarations

By checking to my original Blinker Link Script, I realised that I had inadvertently left out a prg whilst including a couple of redundant prgs.

10. Once resolved , bingo, FAS4WVG was finally built and launched 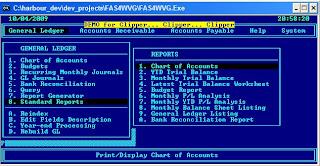 
In 1997, then using Delphi 3, I had already created 32-bits Windows applications for HRIS, ERP and CRM. In 2007, using Ruby on Rails, an AJAX powered CRM site running on Apache & MySQL was created and I am now using Visual Studio .Net 2008 to create web-based projects and Delphi 7 for Win32 applications using SQL2005 & DBFCDX.

So, why then am I reviving the Original Clipper... Clipper... Clipper via a Blog as CA-Clipper is a programming language for the DOS world ? Believe it or not, there are still some clients using my mission-critical CA-Clipper applications for DOS installed in the late 80's and up to the mid 90's. This is testimony to CA-Clipper's robustness as a language :-)
With the widespread introduction of Windows 7 64-bits as the standard O/S for new Windows based PCs & Notebooks, CA-Clipper EXE simply will not work and it has become imperative for Clipper programmers to migrate immediately to Harbour to build 32/64 bits EXEs

This is the original Welcome Page for Clipper... Clipper... Clipper, which I am republishing for historical and sentimental reasons. The only changes that I have made was to fix all the broken links. BTW, the counter from counter.digits.com is still working :-)
Welcome to Chee Chong Hwa's Malaysian WWW web site which is dedicated to Clipperheads throughout the world.

This site started out as a teeny-weeny section of Who the heck is Chee Chong Hwa ? and has graduated into a full blown web site of more than 140 pages (actually hundreds of A4 size pages) ! This is due to its growing popularity and tremendous encouragements from visiting Clipperheads from 100 countries worldwide, from North America, Central America, Caribbean, South America, Europe, Middle-East, Africa and Asia-Pacific. Thanx Clipperheads, you all made this happen !

You may ask, what is this Clipper stuff ? Could Clipper be something to do with sailing as it is the name of a very fast sailing American ship in the 19th century ?

Well, Clipper or to be precise, CA-Clipper is the premier PC-Software development tool for DOS. It was first developed by Nantucket Corporation initially as a compiler for dBase3+ programs. Since then, CA-Clipper has evolved away from its x-base roots with the introduction of lexical scoping & pre-defined objects like TBrowse. As at today, the most stable version ofClipper is 5.2e while the latest version, 5.3a was introduced on 21 May 1996.

For 5.3b users, you must a take a look at Jo French's comments on unfixed bugs in 5.3b.

BTW, have you used Click ? If you're a serious Clipperprogrammer and need an excellent code formatter, Click is a natural choice. How to get it ? Simple, access Phil Barnett's site via my Cool Clipper Sites.

Have you tried Xbase ++ ? Well, I have and compared to Delphi (my current Windows programming tool of choice), I'm still sticking to Delphi.

Anyway, you should visit the Alaska Home Page. Give it a chance and then draw your own conclusions !.

Is this the future of Xbase ? Take a look at at the Harbour Project

According to counter.digits.com, you are visitor

If you like or dislike what you see on this website, please drop me a line by clicking the email button at the bottom of this page or better still, by filling out the form in my guest book. If you are not sure what to write,click here to take a look at what other Clipperheads have to say.